Actually, today looks like it’s the last day of super annoying weather, which for me includes anything over 80°F. Hey, I’m from Michigan. I moved up here to the wilderness to escape the 90s of Detroit summers. My optimal running weather is something that hovers around 50°F.

Speaking of running (this is a running blog, after all) I rolled out of bed for a short 5K this morning, just to test the waters. I also wanted to test the new (used) pair of Brooks Pure Connects I got in the mail (yay for eBay).

I should have flipped this photo around, right? I feel like I’m about to fall over when I look at it.

It was also time to break out the new Pro Compression socks – the retro version. (I used the code “RETRO” to get 40% off this pair.) 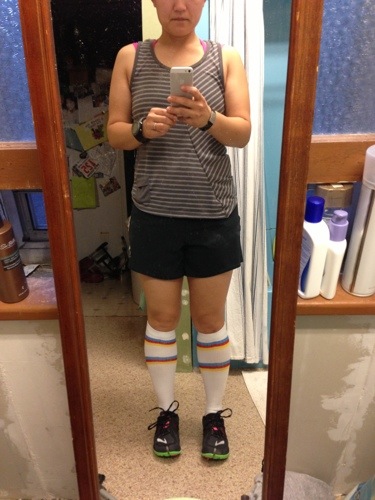 Oiselle Ensemble. I know there are a lot of stripes going on here, but I dig it. Plus, it’s like a bajillion degrees.

Since I had on new trainers that are unlike anything I’ve worn before, I wanted to take it easy. Though I can’t blame my slow pace this morning on shoes – I just felt kind of sluggish and the air felt thick this morning. I slogged through the workout and maintained a 10:00 min/mile pace. 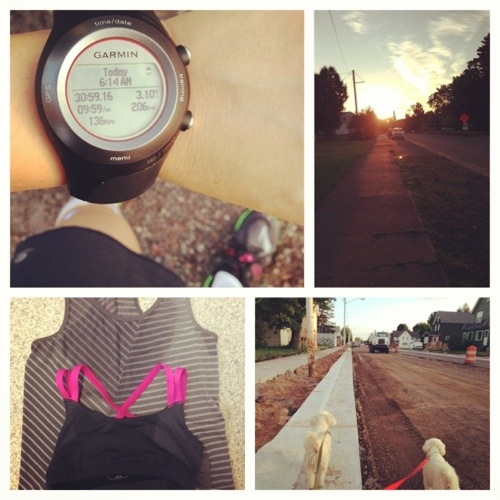 I sweat just a little bit. Review soon on the strappy bra.

I’m thinking a lot about the half on Saturday. When I signed up for it a month ago, I had no intention of trying to make it a PR. In fact, I’m not even quite sure what my PR is for a half marathon. It’s probably somewhere around 2:17. The half is not a distance I “race” (using that term very loosely) and although I do make a note during the marathon of when I come through 13.1, I wouldn’t call that an official time for that distance. After all, when I’m coming through at that point, I’m saving up everything I’ve got for the last half of the race. There is no sprinting through at the halfway point.

Based on how my legs feel today, I would say it wouldn’t be smart to try to PR Saturday.

There’s always a but.

The weather is supposed to be ideal (high of 59) and it’s still three days away. This is also a course that I stand a pretty decent chance of running well. I have run it many times in training and in other events (there is a 10 miler that I’ve run twice), so I know what to expect. The only difficult stretch is near the end after 11 miles, and it’s a “climb” of about 100ft. One hundred feet? While I don’t know the official stats on elevation from last weekend’s trail race, I’m fairly confident that I could do 100 ft in my sleep.

So we’ll see. I am totally open to plans changing if things don’t go my way. It’s really just supposed to be a training run for me anyway. Maybe I’ll slow down and enjoy myself instead.

So I’ve been finding a lot of really cool runners to stalk –  I mean, follow –  on social media. And it’s great to see other (mostly) women talk about their runs, see that cool gear they use, etc.

But sometimes I find myself comparing myself to them – their pace, how they look, what they do. And it’s a stupid thing to do. Why do I compare myself to a 24 year old or someone who’s 6′ tall with legs that never end? Why do we do that as women?

So here’s my reminder:

I’m going to do my best to not hold myself to an unrealistic (or just plain stupid) standard or compare myself to others while I’m on this fitness journey. But I’m going to continue to seek inspiration and motivation on the Interwebs. After all, the awesomeness that is the Internet led me to find out about Kona Kase.

Not-so sly transition into a little blurb about Kona Kase

I think I saw this in someone’s Instagram feed one day and decided to check it out. For $15/mo, you get a little box of healthy fitness-themed snacks/energy food. Some of the past Kona Kases I’ve seen have included Picky Bars and yes, Garuka Bars!

I’m looking forward to trying the granola and the Chia Bar. I’m pretty picky about gels and blocks, so those might go to Scott. The Garuka Bar, however, will be all mine after my half on Saturday (motivation!!).

More later on the Kona Kase and its contents. Want to check it out? [Kona Kase LINK]