And by “charming” I mean miserable.

If you missed the big news on my main blog, I’ll catch you up: I’m having a(nother) baby.

I’m sure every woman who’s had a kid has at one point said the words (or a variation), “If I did it again, [this] is what I’d do differently.”

Of course, I’ve uttered that phrase twice now. Surprisingly, I’m completely brilliant every time I say it and my thoughts are crystal clear. And I’m never actually pregnant when that happens.

Shockingly, I have done a few things different this time around. In some ways, this pregnancy feels just like the other two.

See where I’m going with this? I’m also still in the first trimester (a week and a half to go, baby), so my outlook might be a little jaded by all the “morning” sickness.**

One thing I did vow to do this time was to exercise more. It was tricky with the last one (sketchy placenta attachment kept me from running) and with my first, I felt so awful and was in such a rotten place emotionally that I just laid around for nine months. I’m not exaggerating.

With the exception of a few weeks, I’ve been able to get out and do something a few days a week. My goal is to run 3-4 days a week. Nothing crazy – my last six miler was about a month ago – and nothing fast. I aim for 3 miles and see how I feel. The weather has also sucked balls, so that hasn’t been particularly motivating. 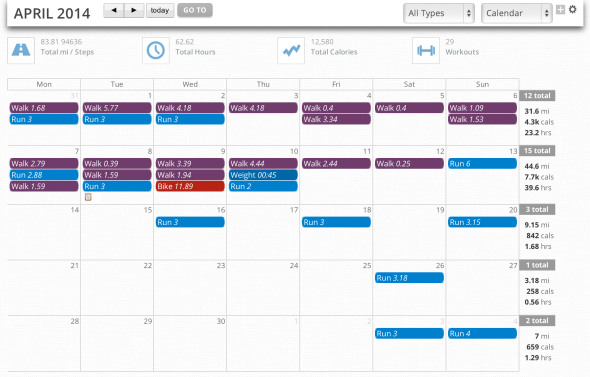 The middle to end of April was pretty awful, as the calendar shows.

My thoughts so far on pregnant running?

I will admit that I’m incredibly bummed out that I won’t be putting in a fall marathon this year (especially since I already paid for it and its nonrefundable) but on the other hand, it’s a little bit of a relief to know I don’t have a huge race or series of races to train for. My runs/walks/whatever can just be for exercise and enjoyment. Shit, it’s been so long since I haven’t trained during the summer for a fall marathon that I am not sure what to do with myself.

Slowing down has been tough. I finally turned pace off the GPS display, just so I wouldn’t be completely bummed out while waddling around. My first priority is to run based on time – usually 15 minutes out and then back – but keep distance on the second screen just in case I’m feeling really good and want to go for an even mile count. Because, OCD.

But an even (literally) bigger challenge during these workouts is finding clothes to wear, because nothing fits anymore. Turns out that when my body found out it was pregnant it decided to yank on an internal ripcord and bust out all over. On an incredibly gassy day? I could easily pass for 6 months, no problem. 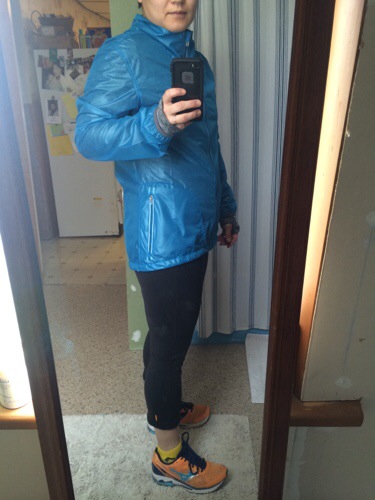 This was on a relatively good day, being that I was able to zip up this Flyer Jacket. Let’s not talk about the amount of compression required in the capris I am wearing (I can only wear these pants first thing in the morning).

Since I’ve never run this far into a pregnancy before, I’m not sure how it’s going to go. I can already feel stuff pressing on my bladder in an uncomfortable way, so I ordered one of these things and will have to let you know how it works. I’ll keep running until my doctor says to cut it out or it gets too painful, and then I’ll switch to walking (boring).

Have any good pregnant running tips? Feel free to share them in the comments.

**Let’s not kid ourselves – it’s not just in the morning but all fucking day long.