The final countdown is on! Six days until the race! Work has been nuts and tonight we might actually get the rest of the nasty carpeting out of the bedroom in the back of the house  (office/spare room). One of these days, my life will slow down and I’ll have time to do some actual writing on the Internet.

Until then, here are my splits from Saturday, the last “not really long but requires a few minutes of planning” run before the marathon. 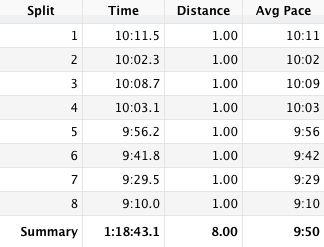 I really did not have many expectations for this run, but I did want to attempt marathon goal pace. If these eight miles could somehow translate into 26.2, I’d be really happy.

For the record, I have set a goal with fallback goals. Hooray for aiming sort of low but not really! There is no DNF option in any of these goals, because DNFing sucks, having been there before. At least I’ll have something to hang over my son’s head one day when he’s being a total jerk. (It was because of you that I had to quit at mile 17.5! Damn you, in utero!)

So my ULTIMATE everything is going great, I’m healthy, the weather rocks, I’m in a zone, running is fucking awesome goal is to finish in 4:20. That’s a 10:00/mile overall pace. That’s pretty much an “I’ll be over the everloving moon” goal. But reach for the stars, right?

Goal B: Finish 4:30 or less. That’s probably the more reasonable goal and one I really do feel I could accomplish if I stay focused, shit doesn’t start falling apart on my body, stomach behaves, etc.

Goal C: Finish 4:45 or less. 4:45 is my marathon PR (Chicago ’04) which was a helluva long time ago. I also remember how hard it was to achieve that. However, I feel I’m in better running shape than I was then, and I know what to expect on this course.

I’m not usually one to want to throw those goals out there, because it’s easier to just report on how I did after the fact and not feel like a complete failure if I don’t meet my goal. But dammit, let’s go for it.

Also: overarching goal is to have a good time and remember that this race is the fucking reward for running my ass off all summer. So yes! Fun! Journey! Neverending optimism! Hooray!

So to start out the last week before the race, I ran my scheduled 3 miles this morning, just hoping to keep things easy and pretend it was the beginning of the race.

Note: I will NOT be able to start the race out at this pace if I want to come close to my goals, or at least I think I can’t. I keep reading you should start out slow and build up to the end. While the idea of having any gas left in the tank at the end of 26.2 miles seems ludicrous, I’m going to trust the many seasoned running experts/coaches and do my best to follow that plan. I’m going to try to keep my pace slower than goal for the first third, goal for the middle, and a little faster at the end. This might totally backfire on me, but most of my runs this summer have slowly progressed to be faster at the end. Maybe I can actually do this.

In other sucky news, my back is killing me. Lower left region primarily. It is so bad it’s really uncomfortable to sit in my chair at work. I broke down and scheduled a chiropractic appointment for this afternoon. I haven’t been in at least six years. This is a new guy (the CrossFit coach guy). I’m not super excited about these types of things in general – I’m weird about people touching me, even in clinical settings – and I have never had a real massage for that reason. I’ve seen a chiropractor so I know what to expect. But let me also just throw it out there that this guy is disarmingly attractive, which makes things even weirder for me. Then again, would it be less weird if he were a troll?

It also does not help that I’m having a really lousy self-image day. I’m ten pounds over where I wanted to be at this point, and I’m really 15 pounds heavier than what I consider my goal weight. It doesn’t keep me from enjoying my life but it pisses me off. It feels like failure. I know how much easier running is on my body when I’m lighter, so I’m not doing myself any favors for the race. So maybe the added thought of some dude putting his hands all over my squishy frame isn’t really something I’m feeling wild about either. Wah, wah, sad trombone, waaaaaaah.

Eating carbs, going to cute chiropractors – The things I have to do for this bloody race!

And in the last week, She rested. »
« I have to admit it’s getting better