I have to admit it’s getting better

It is not surprisingly difficult to get out of bed on cold fall mornings, especially when you’re snuggled up to your almost 18-month old son who seems to have the beginning of a head cold and is extra cuddly.

But I did. At approximately 4:30 I made it out of the bedroom and after checking up on Instagram and deciding which pair of socks I was going to wear (I went with yellow, BTW) AND finally remembering to grab the handheld water bottle (since I was feeling a little underhydrated), I set out for my four miles.

I really did not have much of a plan when I started the watch, but after the first few minutes I decided to attempt to run the middle miles at a faster pace and leave the head and tail as easy miles. It seemed perfectly reasonable for a short run without completely overdoing it during the week before my race.

The first mile felt slow, but not as sluggish as they have the past few days. I clocked the first at just shy of 10:00 and slowly increased my speed for mile 2. This mile starts up a gentle incline and then flattens out. I tried to keep my pace moderately hard, though I’m not really sure what that is, to be honest. Since it was dark, I didn’t do too much Garmin gazing.

I wasn’t sure what I’d have left in me for the third mile, but I just tried to keep the pace steady and clear my mind. I often use my runs as a time to sort out stuff – work, home, etc. – but I really focused on just listening and feeling the footfalls, maintaining good form, and breathing. The last half mile seemed like it was taking forever, but finally the beep came and when I looked down at 8:46, I was pretty damn surprised. 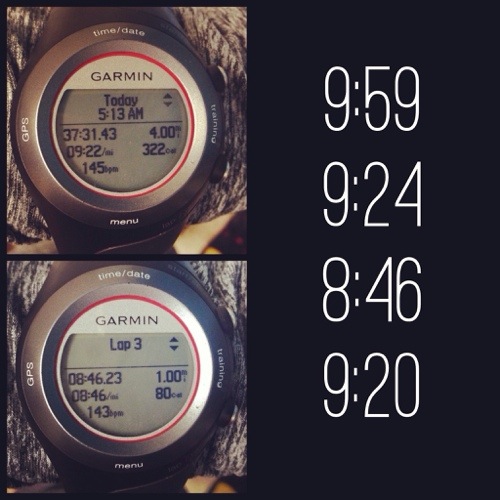 It’s not that I don’t know I’m capable of a sub-9:00 mile, but in general? They don’t happen. And while I could probably run an even faster mile if I really wanted to or tried, this makes my day. For a girl who could never run faster than a 10:00/mile and at one point, post-childbirth couldn’t even make it a mile without walking, I’m really pleased with the progress I’ve made since then.

Oh, and that last cooldown mile? Felt like a breeze. I can’t believe I’m saying that about a 9:20 mile.

Since the runs are a little shorter during taper, I have a few extra minutes in the morning. I haven’t been able to use the juicer for awhile – laziness, lack of time, etc. – but had some kale and spinach in the fridge I wanted to use up. I’m still experimenting with what I like and don’t. Like: ginger. Don’t: cucumber (even though I LOVE to eat them, which is weird). Today’s juice: kale, spinach, apple, carrot, celery, ginger, lemon. 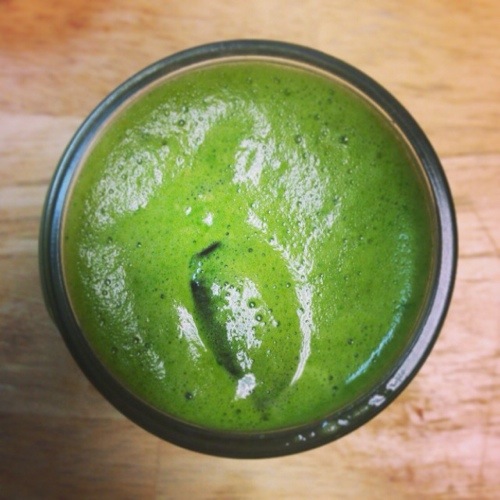 The key? Taste as you go. I have made the mistake of waiting until I’ve turned off the machine to test it and finding it’s absolutely vile. This time I knew I needed to add more lemon – it totally brightens up the flavor – and the apple (pink lady) made it sweeter.

Yeah, it wasn’t exactly a low-calorie juice, but it’s not exactly on the level of egg mcmuffin calorie intake, either. 🙂

Cue Europe here »
« The morning after