Getting out of bed at 4:20 is getting a little easier every day. The tough part is getting ready in the morning without waking up the baby or making a sound that makes the dogs go apeshit (resulting in the baby waking up).

I don’t have very many runs left until the marathon – ten, to be exact. But will I still get up to run in the morning? I think I’d like to if I can. It does make for a really early day for me, which means I’m usually ready to gnaw my arm off in runger by 10:00am. So far this morning I’ve eaten:

Today’s run wasn’t the greatest but it did feel a little better than yesterday. It was more of a struggle to keep myself on the route I’d chosen. I’ve found an out and back that is mostly streetlamp lit, making it ideal, but it’s boring as hell. 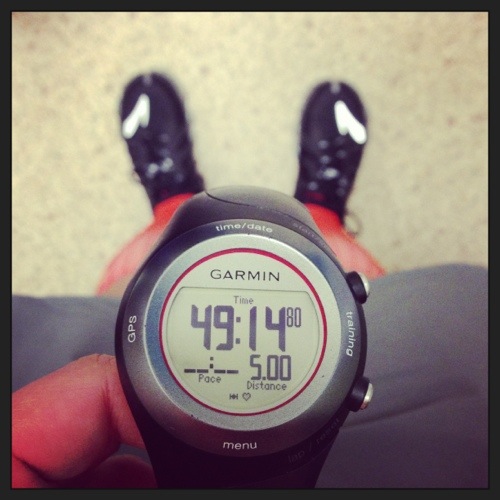 Laps were a little faster today. I suppose that’s not a bad thing.

I also tried a new (very gently used, according to the description) pair of Brooks Pure Flow2s, in the CORRECT size this time (stupid online shoe fitter thing is bullshit). They do feel different than the v1 shoe but aren’t quite as minimalist feeling as the Pure Connects. I like the PCs, but as an everyday shoe, I prefer the slightly more cushioned feel of the PFs. I think I’ll run in them a few more times before I decide which pair to wear for the race.

I thought I’d made a genius move last week when I ordered a pair of boy’s shoes (same model). Wrong-o. Correct length, but the toe box felt too narrow. It’s too bad, too. They were almost half price of the women’s version. Boo!

One thought on “The Ten Run Countdown Begins”