Even though I love the marathon and even the training that goes along with it – the long, sometimes tedious, but always superfucking rewarding training – I have feared the long run. I wouldn’t put myself in the category of LRHA (Long Run Haters Anon), but there’s fear. Usually there’s a weeklong freakout leading up to it and then a somewhat restless night prior, including a morning of “am I eating enough? Too much? Do I need to poop?” You know. normal runner problems.

The thing is, I haven’t put in a successful 20 miler in a long time, and I’ve been running a marathon a year since 2004 (missing 2009 when I had just squirted out a kid). The first summer I trained for a marathon (summer of 2004 for Chicago), I put in 20 miles, and it wasn’t exactly pretty. It was slow, hot outside, and I was alone and really didn’t have any idea what I was doing. I remember getting a cell phone call from my friend Emily (who ran Chicago with me that year even though she could’ve smoked my ass), somewhere near the end of my run. She was upbeat, able to converse, and well, in a lot better shape than I was. I remember thinking, how the fuck are you even talking on the phone right now?

My training over the years has ebbed and flowed depending on what was going on in my life. The year I felt the most prepared for 26.2? The Twin Cities had brutally unseasonably hot weather and it killed me. My 4:30 goal turned into a “just finish,” and I am pretty sure I came in around 5:15. (Someone died that year during the race.) Since then there have been two childbirths, some serious laziness, and well, life. Life stuff has happened that has taken priority over sticking to a plan.

Last summer was my post-partum marathon, something I didn’t try with Sophie. Aaron would be born in April, which meant I had a little less than six months to train. Piece of cake, I thought. I’d be running four weeks post-partum. I’d have no problem getting race ready. But the reality was that I wasn’t feeling anywhere near semi-normal until July. And the early runs? Torturous. The longest run I logged before the big race was 13, and they were hardly quality miles. I finished, but barely. And I told myself I wasn’t going to do that again.

This summer I was determined to stick to the schedule and get in the preparation the race deserved. The plan I’ve been using (a Hal Higdon schedule) called for two 20s. I’d never been able to get these in, and earlier, when I was supposed to put in a 20, I aimed for 18 (hotter than hell). Didn’t make it (ended up doing 16). A mediocre 12 and another so-so 12 happened, and then it was the week of the second 20. I really didn’t care how this run went. I wasn’t too concerned about time. I just knew I had to see 20 miles tick by on my Garmin. I needed to achieve that distance for the sake of confidence. This was totally going to happen. No excuses.

I usually try to nap my route out during the day on Friday but got super busy. Lunch was the traditional carb loading at Rodeo with Team /var/run. 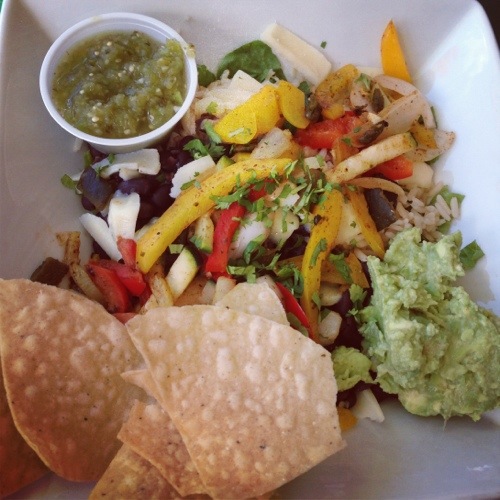 I didn’t plan out my route until later that evening, finally deciding on a one way route that included a merciful 3-4 mile stretch that goes downhill during the first half. Is this cheating? I’m going to say no. 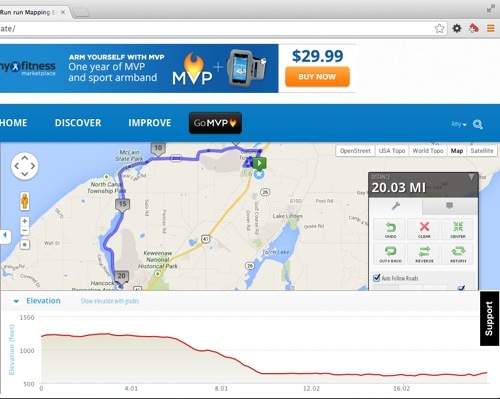 Dinner: spaghetti with pesto (light) and spinach and tomatoes. Trying to steer away from a lot of meat the day before a long run. 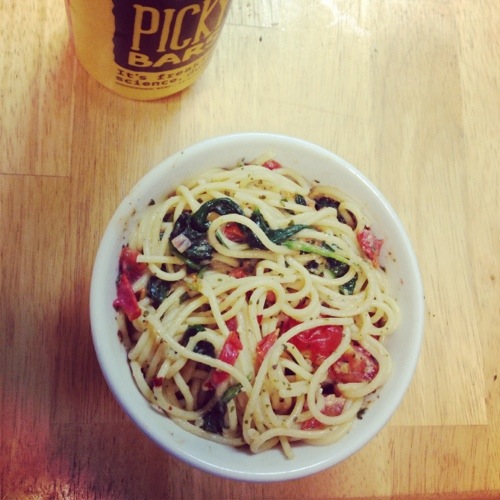 I decided to go for a Picky Bar for breakfast, since I seem to operate better on a gluten-free option before long runs. Maybe that’s complete bullshit, but I’m just going with it.

I also tried putting some pepto in a pill pouch, just in case I needed it. Didn’t need it, but it also didn’t explode, so winning! 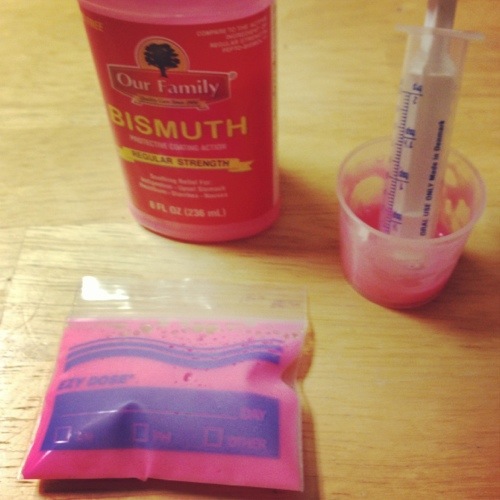 I also didn’t get out the door until almost 10:00; Scott was putting in a short run and wanted to get it in first. There may have been some ass dragging here, which I tried not to get too annoyed about. Since the weather want brutally hot, I didn’t stress too much, though the thought of running into the early afternoon wasn’t exactly ideal.

I started out with my regular 5k loop around town then headed out toward the highway, where the bulk of the run would take place. I wanted to keep a pace of no faster than10:00/mile but no slower than 11:00/mile. My first few miles were on the faster end and felt excruciatingly slow. I was glad they felt easy, knowing how much more I had to go.

Don’t think just run.
Don’t stop, don’t give up (yo Gabba Gabba).
Save it for the race (when I considered picking up the pace early on)
You’ve got this (what, mental illness?) 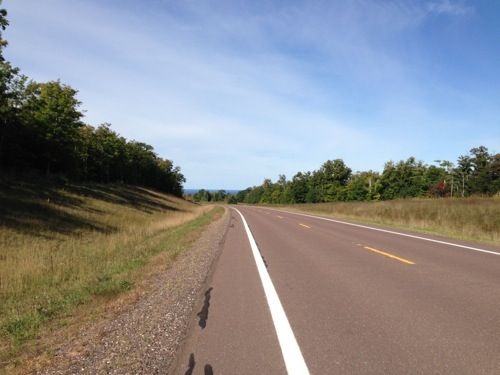 Lake Superior up ahead! Think this was on the downhill stretch

Since I didn’t have my iPod shuffle (still trying to dry it out though I think it’s probably toast), I wasn’t distracted by music or tempo. I’m not one of those people who have to have music. I get why people need it, but most of the time I’m perfectly happy to be alone with my thoughts, or my breathing, or the rustling of animals in the bushes. If I’m going to get run over by some maniac on the backroads, I’d like a little warning. And since I won’t be using music during the marathon, I just think of it as getting ready for the race.

The first eight miles seemed awesome. I was plodding along but still felt okay. My left knee started to talk a little, but I ignored it. I tried to stick to a pretty steady schedule of s!caps and chews, drinking water every so often (maybe every mile) and instead of chewing a bunch of chews at one time, I tucked one or two in my mouth and let them slowly dissolve over time. I’m not sure if this is smart or recommended or even doing any good, but I didn’t get any weird stomach cramping, so maybe I’m on to something?

When I hit the halfway point, I started to feel the miles on my body. I stopped to walk for a minute during the 11th mile, wanting to send my dad a text message. No service. I pecked one out anyway and ended up sending it about two miles down the road. If there was one person I wish I could still run with, it’s my dad. And when it comes to long runs, he’s one of the only members of my family who’s ever run long distances (he’s put in a few half marathons in his lifetime and was a track runner in HS and college).

Miles 12-14 sucked. That’s really all I can say. My mantra: just keep moving. And I wasn’t sure how I ended up doing it, because every bone in my body just wanted to walk. Maybe it was boredom setting in. This is a mental problem and one I hope to get a better grip on over the next three weeks.

Before I knew it, I was counting down from a 10k. Usually I can think to myself, just run another hour! You can do it! I can’t say I was really too excited about that prospect at this point. But as I got down into lower digits – five to go, four to go, etc. – I started to feel better and realize I was going to be able to do this. I took a few mini walking breaks to grab chews, reach for water (only to realize that my ultraspire bladder was empty, boo), and took one final capsule, extremely thankful for the extra 10z flask of powerade/water I’d tucked into one of the pouches.

When I hit the 18 mile mark, my legs started to feel normal again, after I stopped to pull a rock out of my shoe, which required removing the entire damn shoe while balancing on the curb, trying to not get run over by speeding motorists. I have no idea how I managed to get the pace back down under 11 minutes. Adrenaline? Second wind? Golden Fleece Diaper Baby Jesus Miracle? But the last few miles felt awesome, or as awesome as 20 miles can feel, and I finished strong. I stopped my watch just as I was approaching the driveway of Hancock Beach. Time: 3:36:10 (for 20.02 miles). Total overall pace: 10:48. I might not be the fastest runner out there (obvs), but I’m totally okay with this pace. Really. 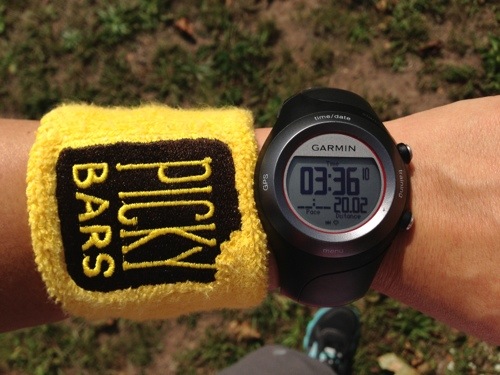 I know I look like I’m in pain but I’m actually pretty pleased in this photo.

I’d told Scott four hours, not knowing if I’d completely die on the course, so I had time to soak my legs at the beach. Water wasn’t terribly cold, so it felt nice. The headwind I’d run with all day was still pretty strong at the beach, so there was no swimming this time. 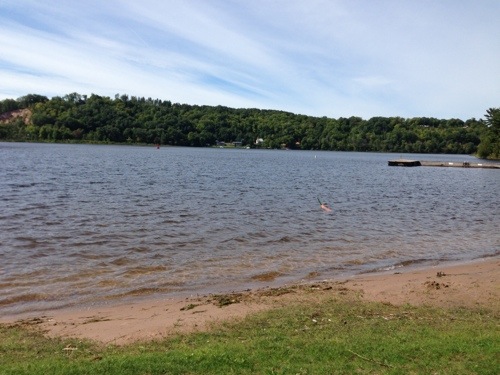 Scott and the kids finally arrived and we drove home. I felt pretty good for most of the afternoon but crashed later. It now seems I’ve picked up a nice cold bug or my allergies are going apeshit. I’m leaning toward cold – maybe from exhaustion. I’m sure my body is saying, hey, I know we hung with you for that stupid long run and you’re feeling pretty happy with yourself, but now we’re going to shut down. KTHXBAI.

This morning I opted to sleep another hour or so instead of braving 35&deg;F temperatures at 4:30AM. I think I made the right choice. I’ll get out later when it’s a little warmer and when I’m (hopefully) feeling better.

Officially, I’m in taper mode and shortly will be suffering from PMS x 2 (Pre Marathon Syndrome and well, the other one).

But it’s done! And I’m happy! Now to enjoy the taper and keep telling myself that I’m ready. 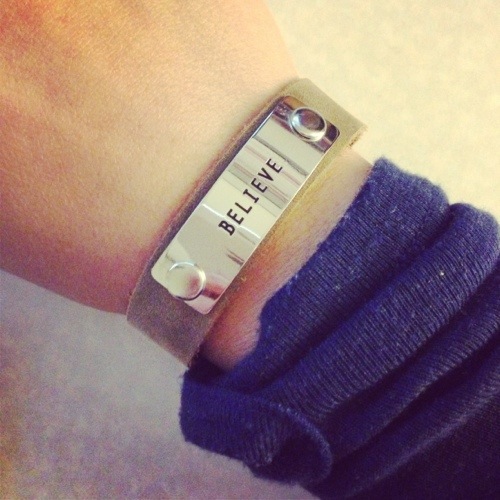 One thought on “Let the taper begin”