I have a confession to make.

I’ve been stalking a lot of you on the Internet.

The thing is, I want to run faster, and I follow a lot of fast runners on social media, blogs, etc. I was never a track or cross country runner in high school (not running XC is one of the few regrets I have from high school!) so I don’t know much about actual running workouts. For me, it’s always been “go out and run until you’ve either hit your mileage goal or you don’t feel like running anymore.”

What’s funny is that a few of my coworkers see me as the running expert, which is hardly the case. Yeah, I read a lot about gear and nutrition and I know most of the acronyms, but when it comes to actual training to get speedy, I’m a complete noob.

My strategy in the past has always been “lose weight, you run faster.” And to a point, that has been true. But lately I’ve noticed my times are decreasing and the scale isn’t going anywhere. If anything, it’s gone up a pound or two over the summer. I know this is probably from extreme runger from all the training, and the fact that I have had zero discipline lately with my diet.

So I’ve been stalking and reading and waking up in the mornings thinking, this will be the day I try a speed workout, only to strap on the shoes, get out the door and settle into my old “just run at a pace that wouldn’t get you passed by that 80 year old woman you pass on the road in the morning.”

Well, dammit, today was the day. It started when I was reading a post by SarahOUaL last night on repeats.

I think the only reason I actually ended up doing this was because she has a step-by-step pictorial of how to set up the workout on your Garmin, something I’ve been too lazy to look up to learn how to do. 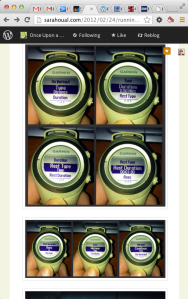 The schedule said 5 miles for today, so i figured if I gave this a shot and ran four 800 repeats with a mile warmup/mile cooldown, it would work out to be just about the right distance.

I set up the Garmin before I went to bed and went to sleep dreaming of rocking 800s like nobody’s business. (Actual: I had a hard time falling asleep and when the alarm went off I secretly prayed it was thunderstorming out so that I could go back to sleep for another hour.)

After getting all the reflective/light gear ready and running back inside to trade my t-shirt for a lux after realizing it was fucking freezing out, I started the Garmin and my warmup.

Just how slow is a warmup supposed to be? Super slow? Not really? I think I ended up running that first mile in about 10:20. It’s hard to say because Garmin decided to put itself in “go to sleep mode” when I was about .75 miles from home. I know I run slow, but c’mon, man.

I futzed around with it, trying not to wander into oncoming traffic on the very dark highway and eventually got it to start the repeats. So I took off, not really knowing how fast I was going to be able to push it for 800m. McMilian pace calculator dude says I should be running 800m in 3:35.

One? Perhaps. Over and over? I wasn’t going to count on it.

I know I should pay closer attention to my HRM when going for effort, but early in the morning in the dark is not a great time to be trying to tap the bezel to get the night light to go on. I tried to push it not as hard as my 400m lap around the track on Saturday but a little faster than I felt I could hang on for a race. And since I couldn’t figure out how to get Garmin to show me my laps as I was running, I had no idea what they were. I think this ended up being a good thing, though.

I also set my recovery intervals for 4:00, because again, I have no idea what I’m doing. In my mind, I was aiming for something around 4:30, so I figured 4:00 seemed fair.

So the results? I did four repeats at:

*back toward the house into the wind and slightly uphill

My cooldown mile was done at a 9:35 min/mile pace. I was just as shocked at this as I was the freaking repeats.

I know these are hardly fast, but for me, it’s a good start to speedwork. Also, the mere thought of running a mile at a pace that is sub-9:00 is kind of crazy. And I also realize that I only did four, but my marathon is five weeks away. I didn’t want to go completely nuts.

Verdict? I like this interval thing. I am looking forward to learning more about them and throwing them into my routine on a regular basis. 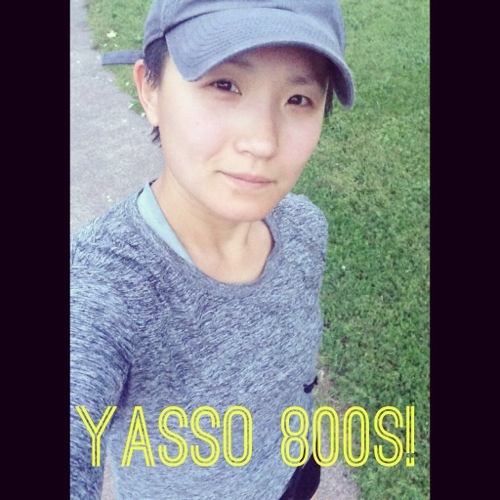 As for the weekend?

Yeah, it’s been a little crazy for regular posting. In a nutshell:

I ran “long” with Scott on Saturday.

It was hot. It didn’t go well. I worried he was overheating and his HR was through the roof. We walked a lot. We had some interesting construction detours.

Total distance: somewhere around 12 miles in about 2.5 hrs. There was a LOT of walking.

I tried a new energy chew, one I actually like. So much, I ordered a box for the rest of training and hopefully, for marathon day.

I also ran a lap around his old high school track (Irondale High School) after we gave up/were finished; the school is a few blocks from his dad’s place.

Aaron helped me eat some cereal and a picky bar. Long run done.

Legs up on our way to a pool party! It was a good way to spend the rest of the day.

I decided to put in 5 miles just for fun and for long run redemption. I have NEVER run the day after a long run in all the years I’ve been doing this marathon thing. It actually felt okay. I then spent the rest of the day walking around the MN state fairgrounds.

We ate all the things, which is why I…

Ran on Monday morning. Four days in a row, people.

It was a great run; there was a chance we’d get in late from driving and if that was the case, I knew I wasn’t going to be thrilled about waking up early Tuesday for a run.

It happened as predicted.

Overall, I’m glad I could still get some running in on “vacation” and not detour too widely from my plan. The long run probably would have gone differently had I been solo, but the time out with the Husband was worth it, even though it was pretty painful at the end.