Out of my comfort zone and into the box

Last night was an unusual one in our house; the four year old was in bed by 7:30 PM. This was due to a “teachable moment” on stealing which occurred after a trip to the gas station with Dad. Yeah, it was as fun as it sounds. That’s a story for another time.

I was actually at home when all this went down. I’d been lying down because I felt like hell, probably from sheer exhaustion. I had a quick cat nap (not sure if it helped), threw in a load of laundry, ate some leftovers for dinner, and got the baby asleep by 9:00 PM.

Since this is a pretty unusual scenario in our house, we did what any other warm-blooded couple who is short on “quality” time together would do:

We flipped on the Game of Thrones Season 2 DVD. Nothing like a little kick-ass Peter Dinklage to lighten your spirits and bring a smile to your face.

We only got through one episode but by the end I was dead tired; it was around 11:30 at this point, which is about two hours past my normal snoozing time. I set two alarms on my phone, for 5:00 and 5:30 (in case I slept through the first). And it’s a good thing I did, because I did just that.

I was scheduled for 4 miles but totally bagged it after the 5K. Legs were shot by this point and so was my motivation.

I’m not sure if this morning’s lackluster run was due to the late night TV or just the fact that I’ve run a lot of damn miles this month, or at least a lot for me. 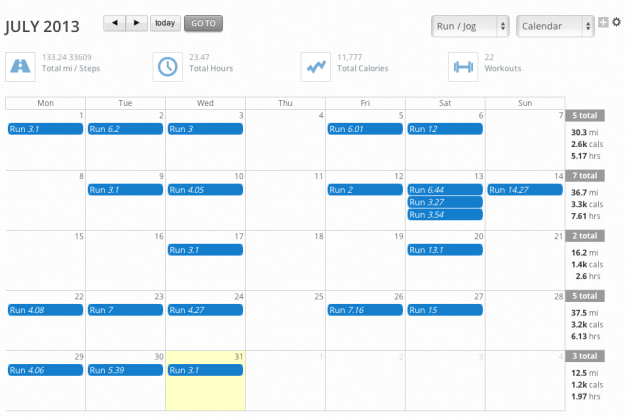 Another reason I shortened the run was because tonight I’m taking the plunge and trying CrossFit.

I’m pretty sure I might die. Better make sure those life insurance beneficiaries are up to date.

I’ve been wanting to try this for a long time, but we don’t have any “boxes” in the area. This workout is advertised as CrossFit, but as to whether the instructor is certified, I’m not sure. He’s a local chiropractor/former collegiate hockey player, so even if he’s not official, I’m sure the workout will be a killer.

Since I have absolutely no upper body strength (except for the mild arm strength from carrying a 21 lb toddler around) I’m a little nervous. There will probably be pushups and situps and all the other things I don’t do regularly but should. I’m sure this fact will be glaringly obvious tonight.

But it’s all about pushing the limits, right? Taking chances. Getting out of your comfort zone.

I’ve recruited a few friends to go along for the punishment ride, so I’ll be sure to report on how our newbie asses handle the pain.

Have you ever tried CrossFit? One of my reservations was that I read somewhere that it could “hurt” my running. True? False? One trip isn’t going to make a difference, I’m guessing.

Unless I can’t walk for a week.