My body is now in “wake up at 5(ish)AM” mode, which is great since I need to be up at that time to get the runs in before the morning routine begins (shower, prepare lunch, breakfast, wrestle kids into getting ready and feeding them something other than an Oreo cookie in the car), but leaves me feeling pretty beat by mid-morning.

Tuesday is a tough morning because it requires both of us to get up and run – a total running time of about 90 minutes at present. When I woke up that morning, it was clear The Husband was not going to get out and go first, so I got dressed and hit the road a little before 6AM. 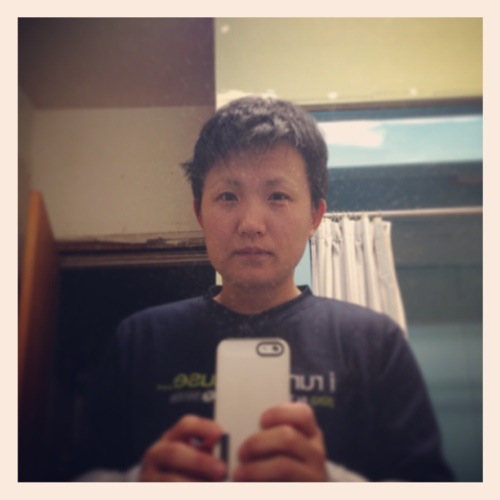 So not feeling it this morning. Can you tell?

What surprised me the most was even though I felt pretty blah before walking out the door (into 40° weather, WTH?), once I started moving I felt awesome. I didn’t have plans to push the pace much (still clearing out the foggy blah mindset), but I settled into a nice rhythm after the first mile and figured I’d just go with it.

This is a total record for me for 10K. I never would have guessed this was possible when I rolled out of bed. 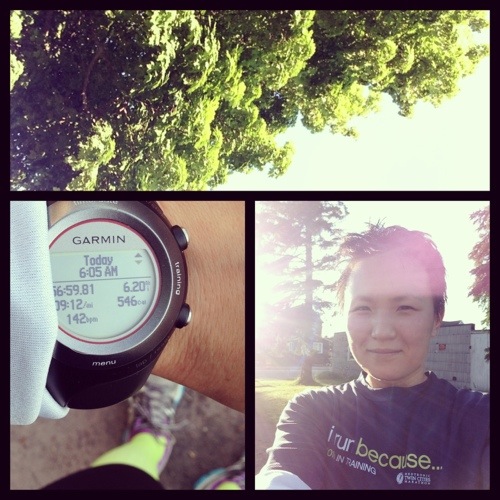 I’ve been doing better with my eating during the day, especially if I take a lunch and avoid my car. If I happen to be out and about for any reason (post office, driving to a remote location on campus, etc.), I find myself pulling into the parking lot of a grocery store/restaurant/donut shop. But where I’m totally failing? As soon as I grab the kids from daycare. By 5PM I’m totally starving, which leads to snacking on whatever I’ve brought for the kids (yesterday, graham crackers). This led to a bowl of Lucky Charms when we got home (dude, they totally are magically delicious) and a handful of Doritos later on. By dinner time my stomach felt meh (gee, I wonder why), so I grabbed a handful of peanuts and decided to bail on dinner (I’d already eaten the cereal and a bunch of other crap anyway).

So when I woke up this morning, I wondered if I’d have enough juice to get my run in, or if I’d bonk halfway through.

My first mile is always the slowest; this morning it was 9:44, which felt about right. I decided to try to keep that pace up or pick it up slightly on the second half, which I apparently did.

I think my last mile was somewhere shy of 9:00 for pace, but I was admittedly kicking it in during the final .75 miles. Still, it feels good to be running faster (for me) and knowing I can keep it up for the length of a race. It makes me anxious to find a 5K one of these days when I’m in the Cities, just to see what I could do.

We head down to Detroit for the holiday to help my folks move some things, which means the rest of my runs this week will be in much warmer temps. Scheduled highs are in the mid-80s, so it will be early morning wakeup calls and praying that the thunderstorms don’t interfere. Six on Friday, Twelve on Saturday (which I might run with The Husband, so the pace will be a bit slower than my last long run).

In closing: weight update: I’m down 2 lbs, so maybe I’m doing some things right and beating the bloat. I hope so.

Couples who run together »
« Hi, July!