I say “we,” because Scott and I decided to run together. We even made a death pact that we wouldn’t speed up in the last .2 miles to the finish line.

It wasn’t a typical race weekend in that we didn’t get to Minneapolis until Saturday afternoon; in the past we’ve gotten there on Friday night.

Having not properly prepared for this race, I did not go in with high expectations. Truth be told, I wondered if we’d finish at all. Having not finished a race has placed that possibility in my mind, which almost makes it harder to gut it out.

Normal pre-race routine: ate a few pieces of toast I found in Scott’s dad’s kitchen. Got race number ready. Decided to wear my new compression socks, which probably wasn’t the smartest thing (new untested gear on the day of a big race) but I was more concerned about my calves cramping than blisters on my feet. There were a few times I wondered if I’d blister, but I didn’t. Hooray, for Pro Compression!

The weather was perfect – about 50 degrees when we finished but chilly when we started. 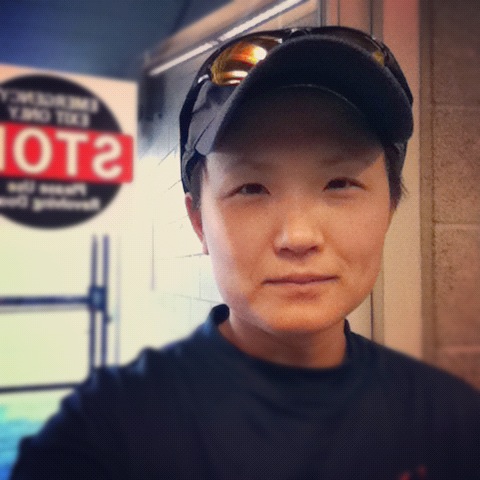 I am almost awake in this photo.

I love seeing all the runners getting ready, the excitement building, many of them running for the first time.

Also: Metrodome is the greatest place for a pre-race warmup. They open it up so that people can use the bathrooms, in addition to the rows of porta-johns out in the parking lot. We always go inside to warm up, and the lines move pretty fast, too. As I waited for Scott to get out of the bathroom, a couple who were first-timers asked me some questions because I “looked like someone who knew what I was doing.” That made me laugh.

We ended up getting to the starting line a little later than normal, and it’s possible we missed the national anthem, because before I knew it we were moving forward and the race had started. So much for pre-race jitters. 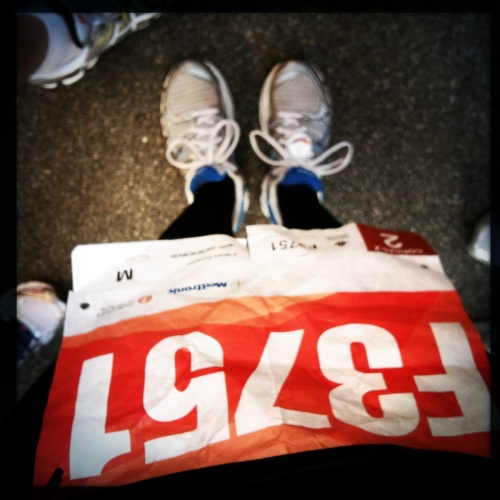 We were running a pretty easy pace at the start, and I had to make myself slow down and not get caught up in the excitement. There was a little trouble with the Garmin as we ran under bridges, and all of my laps were off by just a little bit. It wasn’t a big deal. I was more concerned about staying ahead of our little virtual running partner; I set his pace at 13:00 min/mile. I knew that if we started to fall behind him, the bus would be on our heels.

The first half was really a lot of fun. Yeah, the normal aches and pains started to set in, but for the most part, it wasn’t too bad.

Later in the race: a clever sign. This may have been my favorite all day.

We started to walk at 17 miles at Scott’s request. Don’t get me wrong – I was ready to stop, too. But walking ended up being more painful than jogging. After doing that for 1.5 miles, I told him we needed to start running again, even if it was just a slow trot. That was much better, and I think if we’d not stopped to walk, I would have had an easier time in the last eight miles.

It really is a mental test, maybe even more so than physical in the last 6 miles. Everything hurts. You just want to stop moving. Our last long stretch down Summit St was a killer, and I started to think of anything that would keep my legs moving.

And in the last two miles, we didn’t walk. I told Scott there was no way I’d get going again if we did, which made it tougher on him, but he was a trooper. True, our pace was not any faster than a normal walking pace, but it got it done.

Time from my Garmin? (auto pause was on and didn’t record time when we were doing the bathroom break thing)

Seriously, 12:36 pace of running time? I can totally live with that.

Yeah, you can see it really starts to fall apart at mile 18 when we started walking. (click to enlarge)

So maybe we are crazy for doing this every year. I always say I’m done with marathons and end up forking over the registration fee every winter.

And maybe it’s nuts to devote an entire summer to running schedules and nutrition and blisters and energy drinks and compression socks.

And yet, when I think of my kids, especially as they get older, I want them to see their mom as someone who doesn’t just sit around, waiting for life to happen, making a permanent butt print in the sofa seat cushions.

Sophie at the expo

We both talked about how cool it would be for the kids to be able to come down to the finish line one of these years. I think when they are older, it would be meaningful to them. At least I hope so. So as far as I see it, that means I’ve got to keep at this for a few more years, especially since the next marathon I run will be number 10. 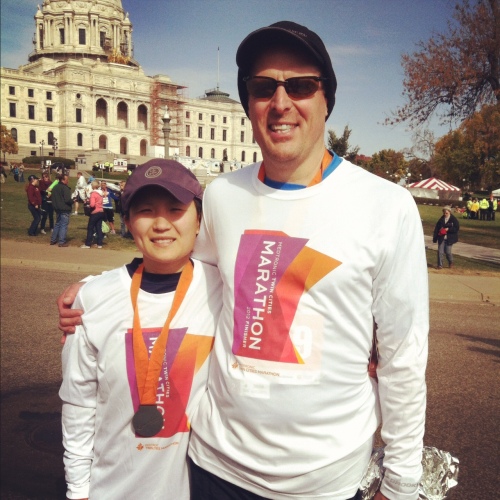 Let’s just hope my body can keep up with my stubborn self.

M is for Marathon »
« Last dance